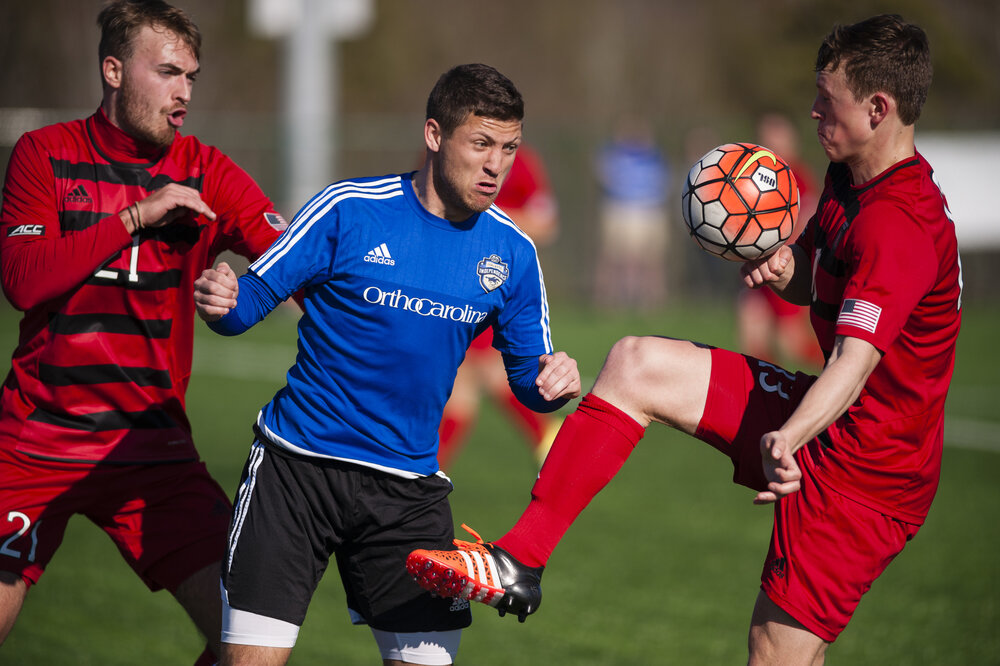 After a long winter break it was time to get out and shoot soccer this weekend, first a high school match on Friday night and today a friendly between the Charlotte Independence and N.C. State University. The match was held at the OrthoCarolina Sportsplex in Pineville under bright sunny skies and was a prime opportunity to test two lenses. The goal was to determine how well these lenses would work for soccer and decide which one I would use this year. Under test was two used lenses I picked up very reasonably online. First up was a Nikon 300mm f2.8 AF-I, the lens came with a two 39mm slip in filters (UV and circular polarizer) and an original Nikon hard case. Everything was in excellent condition and 70% less than a new AFS version. Second was a Nikon 400mm f2.8 AF-I lens with a Nikon 2x converter and two 52mm slip in filters (UV and circular polarizer), this lens shows some wear and tear but works great, and it was a fraction of the cost of the newest model.

I used the 400 for Friday nights game and it worked well, focus was fast and accurate in the poor lighting conditions, I had used the 300 at the 24 Hours of Daytona and it also performed well in the low light conditions. For the match today I shot the 400 during the first half and the 300 during the second. All shots both day and night were at f2.8 and an ISO that would provide 1/1000 of a second shutter speed or higher. The AF-I lenses focus pretty fast, not as fast as the AFS lenses but more than adequate for following any sports or action situations, and as a tip set the focus limiter to one of the range limits instead of full for faster focus. These lenses are sharp, and have great contrast, but large and HEAVY. The 400 is really heavy, it is made of metal not plastic, and because of the physical dimensions it is over 20 pounds.

After using the lenses and looking at the images I have decided the best combination for soccer will be the 300mm. I like it’s size and weight, it focus is fast and it is incredibly sharp at f2.8. I coupled the lens with Nikons 1.4x and 2x converters and it is still really sharp, however you may want to stop it down 1 stop with the 2x. Overall these two lenses are outstanding, however I need to make a decision since I can only carry one of these tanks.

This site uses Akismet to reduce spam. Learn how your comment data is processed.

We use cookies to ensure that we give you the best experience on our website. If you continue to use this site we will assume that you are happy with it.Ok